2018.08.07 So my intention, since the day I arrived in Oxford, has been to attend one of the many nightly musical events.  But my good intentions have been thwarted by rain, by fatigue, and most recently by the pressure of looming assignments. (It feels so strange to write that!)  But tonight there were no obstacles so I enjoyed Early Music by Candlelight in the chapel right here on my little campus.  Chapel? Take a look. If that’s a chapel, I’m Tinkerbell. 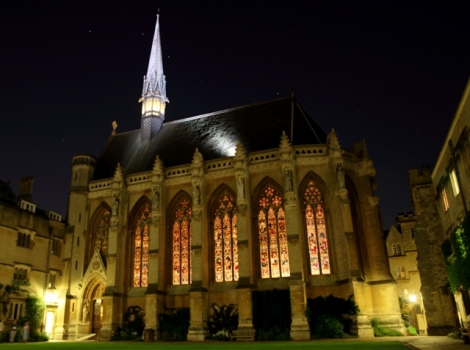 So the program consisted of six selections, four of which were from Vivaldi.  He’s not Bach but he’ll do. Actually he is one of my favorite Renaissance composers. The four musicians were part of a local musical ensemble called “Charivari Agreable” which means “pleasant tumult.”  I was blown away by the venue, but the program itself was pleasant, as the name suggests, but a little lean. I like “meaty” music. But not to worry.  The next morning when I was walking to breakfast, I heard organ music. I LOVE organ music. So I blew off breakfast and sat in the “chapel” to listen.  Not sure who was playing but the music was a T-Bone steak. I know this is getting old, but somebody pinch me please!

So a few tidbits.

Today I asked the porter (building manager) how repairs on the boiler are coming along.  Hey said (direct quote) “Come to think of it, I have no idea.  But cold showers are good for you.”

If he says so . . . All things considered, no worries.

“If you have one, it will get crosswise with Windows 10 and fail just when you have your two final papers due.”

I love my little Microsoft Surface Pro. It has more power, speed and storage than any other computer I have used and it fits in my purse! And the detachable keyboard means I can also treat it like a (large) Kindle.

But about that detachable keyboard.  About 2 weeks before I left the US it started acting cranky.  I googled “My Surface Pro Keyboard Isn’t Working” and discovered that I am not alone. Some stupid issue with Windows 10. But my My rock star IT consultant (shout out to Dana!) walked me through multiple “fixes” and it seemed good to go. And it was. Until the day before all my papers were due.

What to do?  No Microsoft Store in Oxford.  But Google told me that a mere one hundred yards from my dorm is “Curry’s PC World and CarPhone Warehouse.” And sure enough they carry ONE model of a Logitech keyboard. For 80 pounds. $120. At Office Depot, it would have been $29.99. But I was desperate.  I’m typing on it now.

FUN FACT: Speaking of Carphone Warehouse, ten years ago a really unfortunate looking guy appeared as a contestant on Britain’s Got Talent.  A mobile phone salesman from Carphone Warehouse.  Watch what happens.  BTW I am sure I have watched this, no lie, at LEAST 100 times. Enjoy.