This is the latitude of the invisible border of the Arctic Circle that crosses through mainland Norway, Sweden, Finland, Russia, Alaska, Canada and Greenland, and a small island claimed by Iceland.  Traveling north just off the Norwegian coast, our ship made the eagerly awaited passage into the Arctic Circle at about eight o’clock this morning.

As we neared the 66° 33’ parallel, the expedition team called our attention to tiny Vikingen Island just off the port side.  Its only structures are a small lighthouse and a striking marker featuring an iron globe. 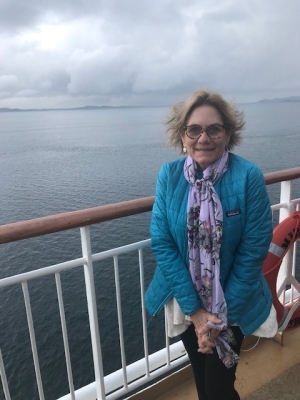 A blast of the ship’s horn heralded our passage into the Arctic Circle. And it was actually quite a moment. My friend Nancy, who was moved to tears, described her feeling this way.

The Arctic represents mystery and adventure to me. All my life I have read and dreamed of the explorers and the inhabitants of the North . . . the Vikings, the Sami and other indigenous peoples, Admiral Peary, Thor Heyerdahl of the Kon-tiki.  As I reached the Land of the Midnight Sun, I felt their spirit, their courage, and their quest for knowledge.  I realized how blessed I am to have this experience and how  much more of the world I want to explore.

The ship’s Powers That Be encouraged us to celebrate. They announced that champagne was available (for purchase) and that a postal official to would spend the morning on board to stamp outgoing mail (and our passports!) with a commemorative post mark. (That precipitated a mad dash to the gift shop to buy postcards and stamps to receive the postmark.  It was, of course, a very good day for the gift shop.)  King Neptune showed up on deck to perform on-deck baptisms into the Arctic via a ladle of ice cold water. Instead of salvation he offered shots of Schnapps. (Pass!)

During all the festivities, the ship was moving forward and at midday we docked at the town of BODØ.  The next two hours were profoundly moving in another way.  The BODØ City museum offered compelling and dismaying evidence of the terrible devastation visited upon Northern Norway by the German army during World War II.  I had always assumed that because Norway remained neutral, the German occupation was relatively benign. So wrong!

Clearly, neutrality meant little to the Germans.  They needed Norway’s safe harbors, and a northern approach to the Soviet Union. They also wanted to ensure that Norway did not fall under the control or the British or the French, and sought to build a notion of a  “German empire.”  Therefore, they reduced much of it to rubble. 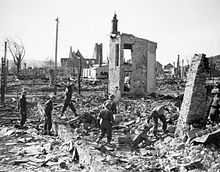 Today was a day of profound contrasts. We experienced excitement and new adventure, but also images of  death and despair.  We experienced the silly as well as the profound.  We were overwhelmed by exhilarating beauty and evidence of mind numbing destruction.  The best and the worst of humankind.